1. When did the REFHYNE plant begin operation?

2. When will first results from operation be available?

The project is on track to have available results from operation from March 2022.

3. Are you accepting site visits?

As the REFHYNE plant is still in the first stages of operation, site visits are not currently available. Visitors to the plant are planning to be accepted in 2022.

4. What are the goals of the REFHYNE project?

The REFHYNE project has deployed and is operating a 10MW electrolyser in a Power to Refinery setting. In doing so, REFHYNE will validate the business model for using electrolytic hydrogen as an input to refineries, prove the system can access revenues available from primary and secondary grid balancing in today’s markets, and create an evidence base for the policy/regulatory changes needed to underpin this market.

By replacing a proportion of the hydrogen supplied by SMR (steam methane reforming), the REFHYNE project begin efforts to decarbonise the refinery processes, with a view to rolling this technology out across Europe and internationally.

5. What is a PEM electrolyser?

6. Why is green hydrogen important?

1. Environmental Improvements
Using hydrogen produced from green sources as a fuel in industry will reduce emissions and improve local air quality. This in turn leads to improvements in public health and is a step towards reducing the impacts of climate change whilst meeting stricter EU regulations.

2. Energy Security
Hydrogen is widely available and can be produced locally through renewable (and other) energy sources, using electrolysers (such as the PEM electrolyser technology being tested through the REFHYNE project). In this way, hydrogen can substitute energy imports, increasing European value in the fuel supply chain.

4. Grid Balancing
Generating hydrogen from electrolysis can help incorporate renewable energy into the energy mix. Electrolysers can provide grid balancing services, operating flexibly to help match demand and supply of electricity, which can lead to economic and energy security benefits.

7. What are the other uses for hydrogen?

Within the REFHYNE project, hydrogen is used in the conventional refinery setting.
More broadly, there are seven main uses for hydrogen across the whole energy system including in industry, as fuel for heat, to replace petrol or diesel fuels in vehicles, power generation and to distribute energy across sectors and regions. In this way, hydrogen could play an important part in enabling the expansion of a renewable energy system as well as a tradition to low carbon transport fuels, with an end result of widespread decarbonisation across a number of sectors.

8. How soon until hydrogen is ready for widespread use? 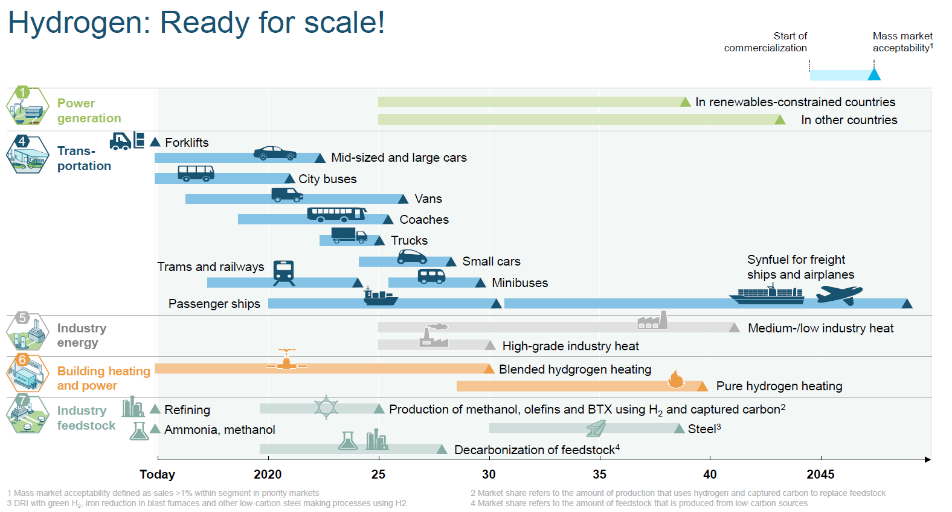 There are widespread plans to increase the uptake of hydrogen between today and 2050 with demonstration and pre-commercial activities already underway across a number of sectors. The European Commission, particularly through its dedicated body – the Fuel Cells and Hydrogen Joint Undertaking, already supports a large number of deployment projects, across transport (including to develop fuel cell electric cars, buses, vans, trains, forklifts and trucks), heating (including micro CHP units), industry and power generation. Studies show that across these sectors, hydrogen is well positioned (or soon to be) for commercialisation and mass scale up over the next 30 years.

Hydrogen (which is at present largely produced from fossil fuels) already has a well-established role and widespread uses in industry applications and acts as an industry feedstock in refining processes and in creating ammonia and methanol. The decarbonisation of this feedstock, through the replacement of fossil fuel produced hydrogen with hydrogen produced by electrolysis and other renewable sources, is beginning to take place and could play an important role in the future.

9. Is hydrogen a safe fuel?

Yes. There is no risk of explosion when hydrogen is stored in a tank. Hydrogen, like any other fuel, is an energy source that is flammable when in contact with air. Risk assessments show that hydrogen is no more dangerous than petrol or natural gas. In addition, hydrogen has been used commercially and in the refinery context for more than 100 years in large quantities safely, including in the chemical industry.